About us / Press Comments

... Half a billion kilometers away from Earth, the Rosetta space probe shot over 50,000 photos of the comet "Tschuri" in 2014, from which the icon dealer Stefan Brenske, in cooperation with the ESA Space Agency, selected the most beautiful ones for an edition. 2950 euros costs the portfolio with seven motifs in a 50th edition. Brenske shows his soft spot for spiritual modern art. Therefore, in addition to icons, there is also an abstract small canvas work by Paul Jenkins from 1951 on which a kind of cosmic star vomits color the painting to the fire pictures by Otto Piene, which were well represented at the fair, but which were mostly created later ...

He knows the magic of the images of saints

NDR viewers know the man with a keen eye for art from the "Lieb & Teuer" program. Stefan Brenske is a leading international icon dealer and co-organizer of the 1st Herrenhausen Art Salon (April 24th to 26th)

... The Munich dealer Stefan Brenske shows a beheading of John the Baptist from the 16th century, and his noticeable enthusiasm for the quality of this Russian icon is due to the attribute "wonderful" for the motif of the creepy topicality. Rar is also a signed icon from the Greek village of Linotopi - there is a "globalized niche market" for such art, says Brenske, who is currently "getting going" by Russian buyers.

At BRAFA in Brussels, BRENSKE GALLERY Munich is showing Russian (and Greek) icons

Russian icons are comparable to old master paintings - but much cheaper. This opens up opportunities ...

... "From 17th century Russia: The Munich icon gallery Brenske offers the small folding altar with festive scenes and the Blessed Mother of Kazan."

... Samovars are not here yet, but there are Russian icons: The owner of the very first Munich Brenske gallery, Stefan Brenske, was particularly proud of the elegant, unusually bright "Mother of God of the Sign" of the 18th century.

Old masters are sold out, the Brafa fair is rejuvenated...

... the "Brussels Antiques & Fine Art Fair (Brafa)" is considered the winter event in the international fair ...
Munich icon specialist Stefan Brenske represents a division of his own with early Russian icons of the 16th and 17th centuries, and for the Brussels debut he brought a board with the "Finding the Relics of the Eugenios Quarter"

At the art and antique salon, icon specialist Stefan Brenske appreciates the images of saints brought by private individuals for the NDR program Lieb & Teuer.

... Thomas (Munich) fired a full broadside of their program: George Segal, Botero, Beuys, Lam, Kiefer, Warhol, Jim Dine, Rauschenberg ...
In contrast, the almost almost hieratic-looking bunk by Stefan Brenske. Icons of the kind that are not difficult to inspire, because you can see them breathing the spirit and showing their love. Brenske: "Yes, things are moving forward. We have been here many times and we want to continue. ”

The art consecrations for classic cars

The Fine Art Zurich art and antiques fair in the Kongresshaus

.... Brenske, a specialist in his field and a loyal participant in the Zurich art and antiques fair, also has first class things to offer in the field of icon art. His Macedonian (Greek!) Icon with St. George shows the martyr and miracle worker not only as a dragon conqueror in the central motif, but also tells his vita arranged around. The panel, which was created around 1700, marks the upper price range of this collection area at CHF 290,000. The focus at Brenske's stand is on Russian icons, for whom he always finds Russian buyers in Zurich.

The man who sells silence

From the hectic business of consulting to meditative silence, with which old icons fill their surroundings: Stefan Brenske has successfully followed this path. In an interview with WELTKUNST, the Munich-based art dealer reveals why the spiritual power of devotional images also fascinates the audience in the lively Palm Beach.

Hell trip on the armchair

30th fair for art and antiques in the Salzburg Residence

… The Easter theme is approached less on a rabbit than on a religious level. Stefan Brenske, icon specialist from Munich, presents - in addition to an otherwise unusual range of large-format iconostasis panels (up to 165 cm) and the segment of Russian house icons popular with collectors - a double-sided processional cross from the 18th century. The eye-catcher in the 18th century, estimated at 21,600 euros. The eye-catcher, estimated at 21,600 euros, was carried ahead of the Easter processions, several times in its history, as signs of use reveal. Or with a Russian icon from the 17th century: Christ's journey to hell - the traditional Easter image of the Eastern Church - shows Christ walking down into limbo, as described by various non-Biblical sources.

The risen Christ stands here in front of an orange mandorla on the broken Hades gates. With his right hand, Christ pulls the forefather Adam out of the grave, with his left hand Eve. Other forefathers of the Old Testament are waiting to enter paradise. "Left, David and Salomon, right, Moses", says the specialist and author Brenske. In a lecture taking place during the fair (March 20 from 5 p.m.), Brenske explains the deep visual influence icons have had on Western modernism. ...

30 years of antiques in Salzburg

30th fair for art and antiques in the Salzburg Residence

... In line with the upcoming Easter festival, Stefan Brenske - in addition to an otherwise unusual range of large-format iconostasis panels (up to 165 cm) - focuses on a monumental double-sided processional cross from the 18th century. The eye-catcher, estimated at 18,000 euros, was carried ahead of the Easter processions, several times in its history, as signs of use reveal. From the segment of Russian house icons, which is popular with collectors, include a "Birth of the Mother of God", Moscow School around 1600 (15,000 euros) and a "Mother of God of Vladimir with seven saints on the edge" (8,800 euros). The Munich art dealer explains the deep visual influence icons have on western modern art in a lecture taking place during the fair (March 20 from 5 p.m.). He also wrote a book about this (Stefan Brenske: Ikonen und die Moderne, Verlag Schnell und Steiner, Regensburg, 49.90 euros). ...

... A strong plus on the Rhine is once again Stefan Brenske from Munich, who scientifically bridges the modern age with his icons, but is rather old-fashioned in terms of prices. The most expensive work for him is a large Nicholas vita from Central Russia for 30,000 euros. ...

… Stefan Brenske was extremely satisfied. He sold an icon every day and praised the knowledgeable audience: "It's amazing how many people come here who have an Orthodox background." ...

Luxury in the candy store

… Even a more remote collection area, such as that of icons, which Brenske Gallery specializes in, can count on enough attention. Finally, a Russian proverb quoted by the dealer says: "It is not the buyer who chooses his icon, but the icon that chooses the buyer". It may be expensive. In Palm Beach you would most likely be guaranteed that the person addressed in this way has enough money in his pocket. You don't have to emphasize that a Palm Beach Classic is good for a social event. A look at the richly staffed "Connoisseurs Committee" brings clarification: It ranges from Leonard and Evelyn Lauder to Donald Trump. ...

… Munich-based Stefan Brenske has a particularly refined concept: based on his study “Icons and Modernity”, which was just published by Schnell and Steiner, in which he analyzes the visual influence of the cult image on the east on western art, his stand sparked a dialogue Cultures when he places Poliakoff's “Composition rose e lit-de-vin” with his own spirituality between his icons. Icons are said to be windows to eternity. Not all works on the “Palm Beach! can be seen, can claim this for themselves ...

… The event was Stefan Brenske’s first American fair. The dealer in Russian and Greek icons saw the fair as a way to familiarize potential new collectors with work they may not know much about. He sold some pieces, but mor importantly, „I would like to come back because I feel the contacts I’ve gathered and the talks we’ve had will develop.“ …

The West German Art Fair ended on Sunday and almost everyone involved is happy. Not only did the feared refusal to buy by the collectors fail to materialize, it was also possible to finally agree on a new regulation for the duration of the three overlapping Cologne trade fairs. Given the modest initial situation, the chairman of the German Art Trade Association (DK), Alexander Sandmeier, found the fair “as expected difficult. But at the beginning we were quite successful. ”This experience can only confirm. On the evening of the vernissage, the Ikonen-Museum Recklinghausen honored Stefan Brenske from Munich and bought the "Holy Menas". Saint Menas was the patron saint of traveling merchants. The sale of the icon created in Greece around 1600, which was awarded with 12,500 euros, could therefore be taken for a good omen. 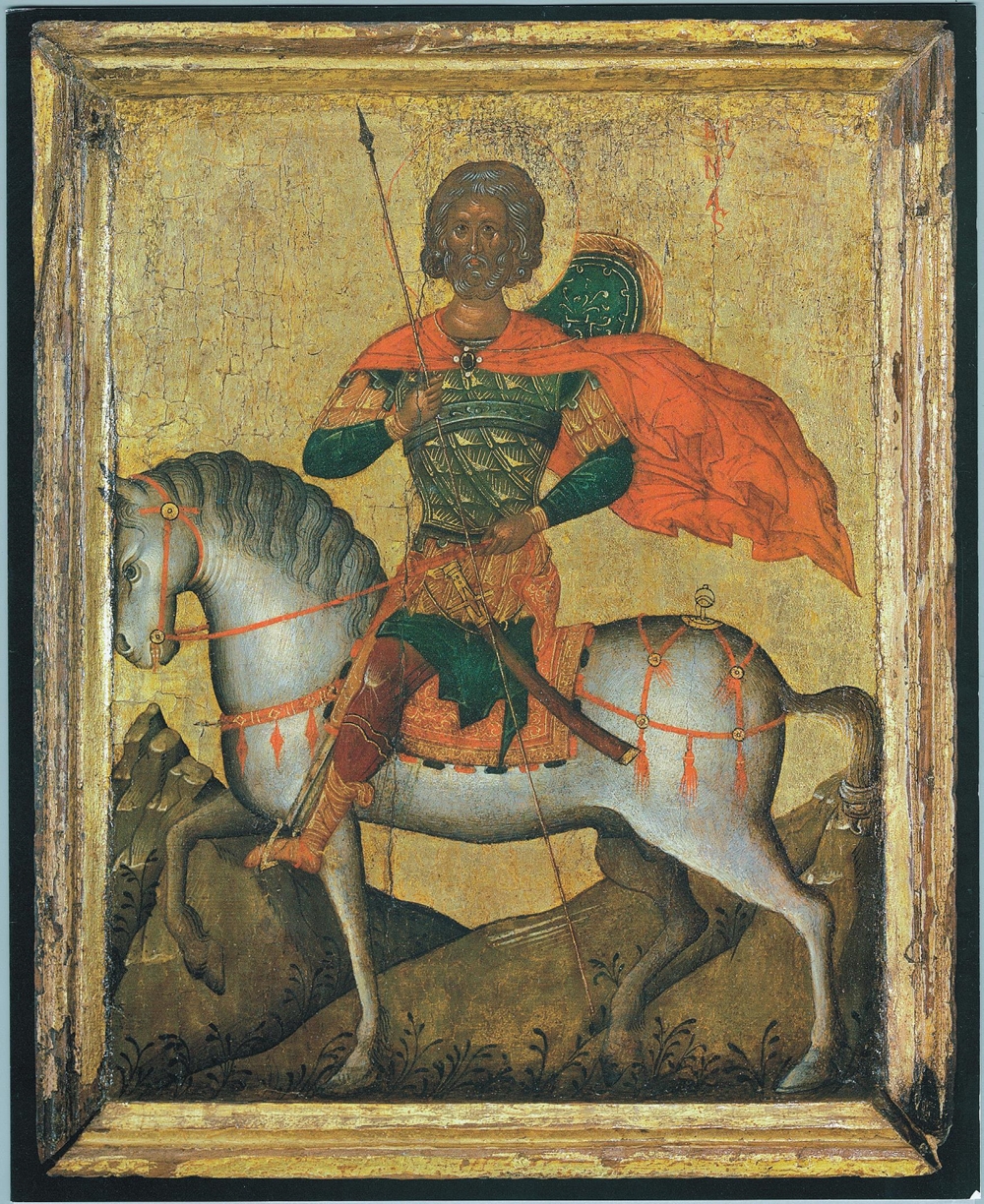